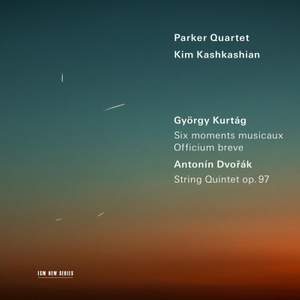 Whether it’s in the incisive attack of the opening Invocation, the passionate mourning in the memorial to the pianist György Sebők, or the precise harmonics in Rappel des oiseaux, they identify... — BBC Music Magazine, Christmas 2021, 4 out of 5 stars More…

On their ECM New series debut, the Boston-based Parker Quartet, hailed by the Washington Post for "exceptional virtuosity and imaginative interpretation," play music of Gyorgy Kurtag and are joined by violist Kim Kashkashian, one of the quarter's early mentors, to play Dvorak. At first glance, the pairing of the two composers chosen by the Parker Quartet and violist Kim Kashkashian for their recording on ECM New Series may appear unusual. However, Gyorgy Kurtag and Antonin Dvorak have more in common than a fleeting glimpse at their oeuvre - an extremely narrow, concentrated catalogue of works in the one case and a multifaceted life's work that lavishly encompasses all musical genres in the other - would suggest.

In this powerful programme of contrasts, Dvorak's outgoing String Quintet No. 3, composed in America in 1893, is framed by two of Kurtag's concentrated, meticulously-shaped works - the Six Moments musicaux (2005) and the Officium breve in memoriam Andreae Szervanszky (1988/89).

Throughout, the Parker Quartet's feeling for colour and texture is in evidence. The quartet's insights into Kurtag's soundworld have been developed through extensive work with the Hungarian composer whose influence on this new recording makes this compelling listening.

The album was recorded at Zurich's Radio DRS Studio.

Whether it’s in the incisive attack of the opening Invocation, the passionate mourning in the memorial to the pianist György Sebők, or the precise harmonics in Rappel des oiseaux, they identify completely with the music.

Virtuosity and emotion are one; this is haunting, phenomenally accomplished playing, captured in forensic detail.