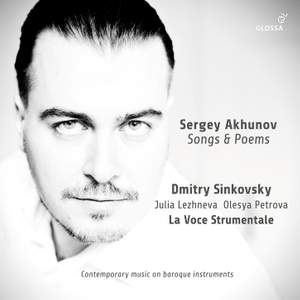 No. 1, Though Your Sorrows Not

No. 3, Who Sharpens Every Dull

No. 1, These Things Amazed Me

No. 2, Homeland! My Heart Shouted

The Russian composer Sergey Akhunov (b. 1967) was educated at the Kiev State Conservatory, before he started his career as an oboe player. He subsequently gained experience in various musical styles and genres such as electronic music and rock.

In the mid-2000s, he consistently turned to composing orchestral, chamber and vocal music, but also film music.

This recording presents vocal music by Akhunov, including "Songs", which he wrote as a commission for La Voce Strumentale.

Dmitry Sinkovsky as the spiritus rector of the recording - he is at the same time singer (countertenor) and conductor - succeeds in an impressive way, among others seconded by soprano Julia Lezhneva in three songs, in combining tonal contemporary music with the sound of an early music ensemble.