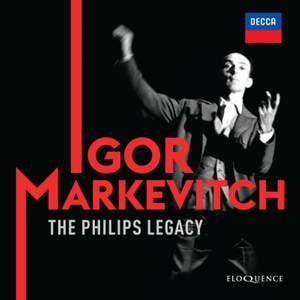 Mussorgsky: Where are you, little star?

Mussorgsky: On The Dnieper

Granados: Zapateado (No. 6 from Six Pieces on Spanish Folksongs)

Igor Markevitchs complete recordings for Philips, made between 1959 and 1968, including several recordings new to CD. Igor Markevitch made his debut on the Philips label in 1959 with a pair of symphonies by Haydn, conducting the Parisian Lamoureux Orchestra, whose fortunes he had begun to revive two years previously. He had embarked on a full-time career as a conductor less than 15 years earlier, having been one of the most original voices of European music before the war. Yet he switched from composition studio to podium with the apparent ease and brilliance that marked everything else this polymath did: fluent in many languages, author of several books, teacher of conducting almost as soon as he had made it his own career, director of ensembles on both sides of the Atlantic, from Montreal and Havana to Madrid and Rome.

His decade of association with the Dutch label produced meticulously prepared performances of the widest range of repertoire: no other conductor can yet claim to have recorded both Victorias Magnificat and Tchaikovskys 1812. There are concertos by Mozart, Beethoven and Falla with Clara Haskil, whom Markevitch saw play Schumann at the very first concert he attended as a nine-year-old. The Lamoureux association also produced French-accented Beethoven and naturally idiomatic Bizet, but once that came to an acrimonious end in 1961, he began to make records in Moscow (vocal works by Brahms, Kodaly, Mussorgsky, Tcherepnin and Verdi, including a famously intense version of the Requiem) and London: his Tchaikovsky cycle with the LSO (1962-7, including one of the first ever complete recordings of Manfred) soon became a staple of the Philips catalogue.

Early in his career, Markevitch became renowned as an interpreter of his fellow Russo-French emigre, Stravinsky: a sympathy represented here by an authentically devotional, Russian recording of the Symphony of Psalms (long unavailable on Philips, like much else here), a French-made complete Soldiers Tale with Jean Cocteau and Peter Ustinov, and LSO recordings of Apollon musagete and the small orchestral suites.

Further rarities include a disc of childrens music (Bizet and Leopold Mozart) with the USSR State SO and the Spanish recordings made in the late 1960s, marking the end of his Philips contract. Having become music director of the Spanish Radio and TV orchestra in 1966, he recorded two albums of zarzuela highlights and surveys of choral music from Victoria to Mompou and Halffter, as well as more familiar repertoire by Granados, Albeniz and Falla much of it appearing for the first time on CD in this set. With original covers and a new essay by Peter Quantrill, the set presents a new and compelling case for a 20th-century genius to whom almost nothing was foreign.

Markevitch has the Lamoureux Orchestra playing both deftly in swiftly light passages and strongly in the big tuttis. And he is good at his Haydn, not only in getting this sort of playing but in responding to the composers subtleties. Gramophone, September 1968 (Haydn: Symphonies Nos. 103 & 104)

Easily the most completely recommendable version in the catalogue. Gramophone (Tchaikovsky: Symphony No.5)

The new, uncut Manfred is likely to remain at the top of the list for a long time. The Times (Tchaikovsky: Manfred)