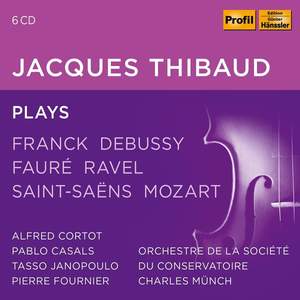 "Jacques Thibaud is considered to be one of the early 20th century's leading violinists and chamber musicians. Such composers as Eugene Ysaye and George Enescu dedicated works to him . His memory Iives on in such bodies as the Jacques Thibaud String Trio, faun ded in 199 4, who pay homage to his Iifelong IOve of ambitious and eloquent Music-making in ensemble."