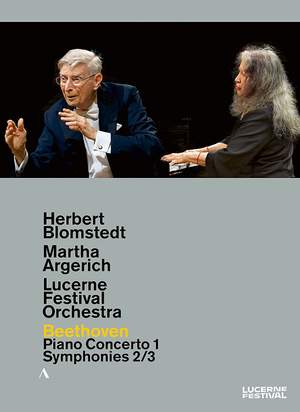 "In August 2020, Herbert Blomstedt made his debut with the Lucerne Festival Orchestra. You could hardly tell that the maestro had celebrated his 93rd birthday only a month prior for he continuously exudes vitality, awareness, and curiosity. 'I’m in love with music,' says Blomstedt, who views his profession as a kind of joie de vivre. Together with the Lucerne Festival Orchestra and Martha Argerich he revealed just what this joy sounds like with Beethoven’s Piano Concerto No. 1 – the work that marked Argerich’s stage debut in 1949 - and Symphonies Nos. 2 and 3, the famous Eroica.

Recorded live at the Concert Hall of KKL Luzern August 2020