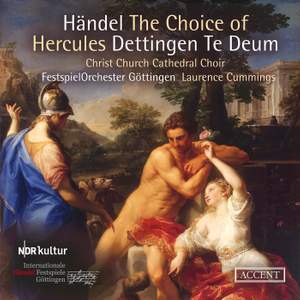 there is much to savour in these live Göttingen performances of two comparative rarities, expertly performed by musicians who love and understand Handel. — Gramophone Magazine, December 2021

Handel: The Choice of Hercules

No. 4, There the Brisk Sparkling Nectar Drain (Live)

No. 5, While for Thy Arms That Beauty Glows (Live)

No. 11, So Shalt Thou Gain Immortal Praise (Live)

No. 12, Hearst Thou, What Dangers Then Thou Must Engage? (Live)

No. 24, Virtue Will Place Thee in That Blest Abode (Live)

V. The Glorious Company of the Apostels (Live)

VI. Thou Art the King of Glory (Live)

VII. When Thou Tookest upon Thee (Live)

VIII. When Thou Hadst Overcome the Sharpness of Death (Live)

IX. Thou Sittest at the Right Hand of God (Live)

XII. Make Them to Be Number'd (Live)

XV. O Lord, in Thee Have I Trusted (Live)

This recording from the 2018 Gottingen Handel Festival presents two rarely heard works by George Frideric Handel: "The Choice of Hercules" and the "Te Deum for the Victory of Dettingen". In "The Choice of Hercules" from 1751, Handel musically processes the mythical theme of Hercules at the crossroads, whereby Hercules' vacillation between virtue and lust is ideal for the back and forth in the search for the right path in life.

The "Dettingen Te Deum" (HWV 283) is a cantata composed by Handel in 1743. On 27 June 1743, the British army and its allies under the command of King George II had defeated the French army at the Battle of Dettingen. Handel was commissioned to write a Te Deum "with timpani and trumpets" for the victory celebrations.

there is much to savour in these live Göttingen performances of two comparative rarities, expertly performed by musicians who love and understand Handel.