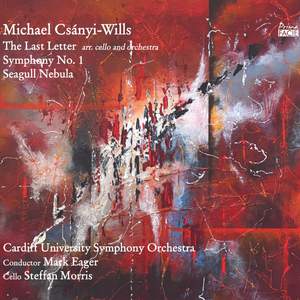 Prima Facie is pleased to release this collection of orchestral works by Michael Csanyi-Wills. Symphony No. I was released in 2020 and was met with great critical acclaim. Keen to continue the working relationships between Prima Facie and Cardiff University, Mark Eager successfully organised the recording of two more works by Michael, The Last Letter and Seagull Nebula and a re-release of the 1st Symphony.

Following the death of my Grandmother, Gabriella Csanyi, I found a letter among her possessions. Written on a folded piece of paper were the words: The Last Letter.

As one of the Axis powers, Hungary had a minimal Nazi German presence until 1944, when the pro-fascist Arrow Cross Party began their reign of terror. Jews were deported to concentration camps or shot and thrown into the Danube.

Irene Csanyi was born to a wealthy family in Szeged. She lost her husband to cancer in 1936. Her daughter Gabriella went to London before the war. Her son Charles was dispatched to the forced labour camps in 1943. Irene kept herself locked away in the family apartment in Budapest, seeing no one but the elderly concierge; out on the streets, the Arrow Cross stalked the city's remaining Jews. One day in October, she ventured out, leaving behind everything she owned. And an extraordinary letter.

The piece was originally written for Soprano and Piano, but was arranged for Cello and Orchestra for the Welsh Sinfonia in 2013.