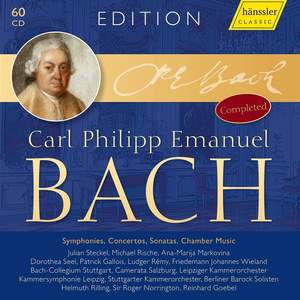 "Carl Philipp Emanuel Bach was born in Weimar on March 8, 1714, as the second (surviving) son of Johann Sebastian Bach. Once he said: ""In composition and in clavier-playing I have never had any teacher other than my father"". CPE received his general education at the famous St Thomas School in Leipzig, where his father had of course assumed the post of Thomaskantor. His first appointment to the court orchestra in Ruppin became a serious proposition only after the prince had ascended the throne as King Frederick 11 (later ""the Great"") in 1740. The death in 1767 of Telemann, CPE's godfather, left the post of music director in Hamburg vacant. CPE's reputation had long since spread beyond the borders of Brandenburg, allowing him to make a successful application. In March 1768 he assumed his office in the Hanseatic city of Hamburg, a move that marked a great forward step for him, both musically and financially. As music director of all five of the city's main churches he had to write an enormous number of cantatas as well as further pieces of sacred music, including passions, oratorios and motets. Thoroughly partial to the pleasures of the flesh, the composer progressively suffered from gout and died of some unspecified ""disease of the chest"" on December 14, 1788. This extensive CD edition is intended to help listeners become acquainted with and appreciate his phenomenal music in its entirety. After all, Carl Philipp Emanuel Bach was and remains much more than just someone's son."