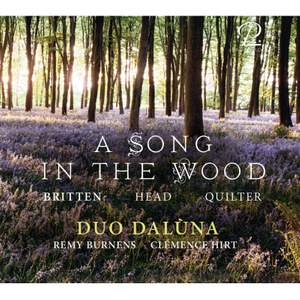 Offer, A Song in the Wood: Works By Britten, Head & Quilter

Head, M: Why have you stolen my Delight

Head, M: Over the rim of the moon

I. The Ships of Arcady

Britten: Down by the Salley Gardens

I. Let the florid Music praise!

'A Song in the Wood' takes the listener on a journey through the most diverse aspects of love, loss and loneliness. For this journey, the young Swiss tenor Remy Burnens and his piano accompanist Clemence Hirt have immersed themselves in the, for many, unknown world of songs by British composers in the early 20th century.

It was a matter of concern for the artists not only to record music that they personally like very much and that is close to their hearts, but also to bring composers who have unfortunately fallen into oblivion, such as Roger Quilter (1877-1953), back into the musical consciousness and thus also onto the current programs of the recitals and lieder evenings.