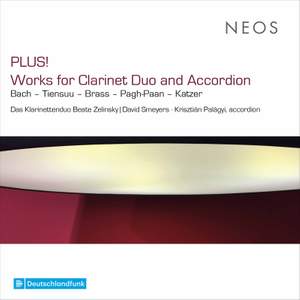 Plus! - Works For Clarinet Duo and Accordion

The title "PLUS!" stands for something that is of central importance to the repertoire of Das Klarinettenduo Beate Zelinsky - the interaction with other soloists or ensemble formations. The combination with the accordion (Krisztian Palagyi) is particularly attractive; it can merge with the sound of the clarinets to a perfect unity, but it can also emerge clearly perceptible from this composite sound.

This prompted Nikolaus Brass to write a work for the three musicians: "Songs and Melodies". It is here, as well as the compositions of Jukka Tiensuu, Younghi Pagh-Paan and Georg Katzer, juxtaposed with music by Johann Sebastian Bach. "Two-Part Inventions" have been placed between the contemporary works in the versions of Max Reger / Karl Straube and Helmut Lachenmann, who each added a third voice. Another level for the idea of "PLUS!" in this extraordinary program.