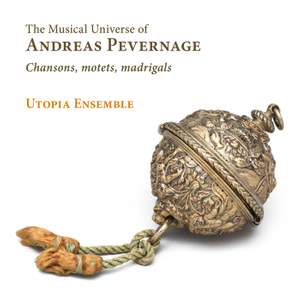 The Musical Universe of Andreas Pevernage

Andreas Pevernage (1542/3–1591) is best remembered today as the choirmaster of Antwerp Cathedral and as the composer of several picture motets that are now classified as masterpieces of Flemish culture. Whilst Pevernage spent his entire professional career in Flanders, which may well have contributed to his music being less well known today, he was nonetheless considered as the equal of Orlandus Lassus, Clemens non Papa and Giaches de Wert during his lifetime: the quality of his music is in no wise inferior to the works of his more famous contemporaries. Pevernage adopted the innovations of the Italian madrigal and also breathed new life into the chansons of the Low Countries. This selection of works, mostly for five parts, is an invitation to discover his stylistic and creative diversity.