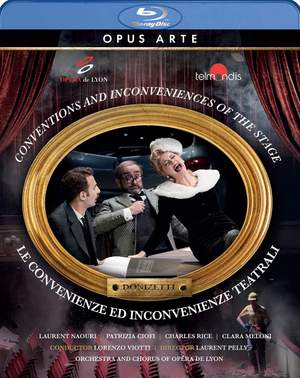 "Described as ‘a joyous romp’ (Opera News), Donizetti’s dramma giocoso shows us what can go wrong when the egos of the actors get in the way of putting on a good show. From the prima donna and the sub-par lead tenor, to the seconda donna’s boisterous mother (played by a bass singer) and all the characters in between, everyone is playing the diva whilst the director pulls his hair out in frustration, and questions of who will fund the production are raised... Le convenienze ed inconvenienze teatrali (‘The Conventions and Inconveniences of the Stage’) – a joyful play on words in itself – more commonly known as Viva la mamma! is a two-act farce that shines an exaggerated spotlight on the behind-the-scenes working of a theatre and the rehearsal process with hilarious results. Laurent Pelly directs this masterpiece of comic timing and satire, marking the continuation of his celebrated relationship with Opéra de Lyon."