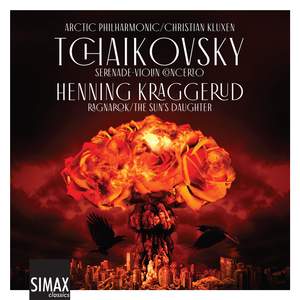 I. Pezzo in forma di sonatina

The internationally acclaimed violin virtuoso, artistic director, and composer Henning Kraggerud has composed a work for this album that addresses the theme of Ragnarok / The Sun's Daughter.

In the booklet, Kraggerud asks the question: "If we ever go looking for a new sun, would we bring Tchaikovsky with us on this journey, so that he might also survive the end of our world?"

Because that's what Tchaikovsky is most about on this brand-new album from the Arctic Philharmonic. His fantastic Violin Concerto in D major, with Kraggerud as a soloist - and the beautiful Serenade Tchaikovsky wrote over the years while he waited for someone to play the violin concerto at all in public.

On this album, the Arctic Philharmonic really gets to show its strengths, not only as very good musicians and artistic leaders but also demonstrates the versatility of the way the orchestra organization is built. With one ensemble in Bodo and one in Tromso who both play weekly concerts in their respective cities - and who gather 8-10 times a year to form a symphony orchestra - the organization gets to fully show how crucial flexibility and innovative organization is.

Here you first hear the chamber orchestra from the polar city of Tromso, where Henning Kraggerud is the artistic director, playing Tchaikovsky's Serenade. Then comes his own composition Ragnarok / The Sun´s daughter played by the same ensemble, before the large symphony orchestra - with musicians from both cities - joins chief conductor Christian Kluxen and plays Tchaikovsky's Violin Concerto in D major, Op. 35, with Kraggerud as soloist.