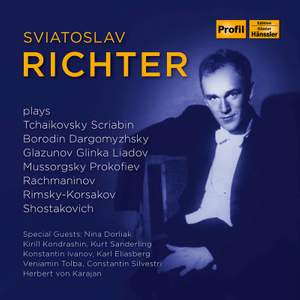 Tchaikovsky: The Seasons, Op. 37b (excerpts)

No. 1 January "at the Fireside"

V. Ballet of the Chicks in their Shells"

Ride on a Hobb y Horse

I recall That wonderful moment „ya pomnyu chudnoye mgnoven'ye” Words by a. Pushkin, 1840

Oh, If I had known This before (gypsy folksong) „ah, kogda b ya prezhde znala” Words by I. Dmitriev, 1855

It Is all the same to me „mne vsyo ravno” Words by F. Miller

"Sviatoslav Teofilovich Richter was born on March 20, 1915 (Julian: March 7) in Zhitomir in present-day Ukraine. His father Teofil (Theophilus) came from a German commercial family. The famous Russian piano teacher Heinrich Neuhaus (of German origin) recognized his huge talent and enrol led him in his piano master cl ass at the Moscow Conservatory in 1 937. Profil Edition Gunter Hanssl er is progressively releasing all the recordings that the great Soviet virtuoso made between 1945 and 1963. Most of them were largely unknown in the West during the Cold War, as Richter could only perform til I 1960 behind the ""Iron Curtain"", that is to say, in the Soviet Union and the sate I lite states of Eastern Europe. The present 13-CD set is devoted to al I the works by Russian composers that Svi atosl av Richter recorded Ii ve or in the studio between 1946 and 1963. The recordings which the famous pianist made with his wife and musical partner of many years, soprano Nina Dorliak, are a true rarity. Supplemented by some forgotten, unknown or neglected gems of Russian piano music this small compendium reveals the incredible wealth of this repertoire and simultaneously showcases yet again the unique performer that was Sviatoslav Richter."