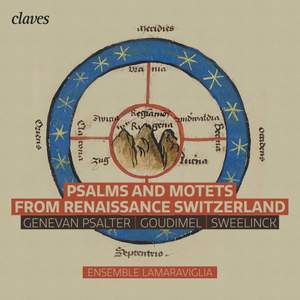 Psalms and Motets from Renaissance Switzerland

The Genevan Psalter - a European synthesis of the arts

In the middle of the 16th century, the Geneva Psalter infected the whole of Reformed Europe – Switzerland included – with a true psalm fever. The first complete collection of all 150 psalms, promoted by the Genevan reformer Jean Calvin, was published in 1562. The psalm verses were translated into French and provided with melodies by various Genevan cantors. Thanks to the collection’s immense importance for the Reformation and its unique artistic content, these psalms inspired like none before the most influential composer of the time to write a large number of polyphonic psalm settings.

The four-part psalms composed by Claude Goudimel (c. 1514-1572) were published in 1564, just two years after their initial release. Set in a simple note-against-note setting with the well-known Genevan melodies in the tenor part, these psalms quickly gained incredible popularity. They were provided with translations of the texts into German, Dutch, Italian, even Rhaeto-Romanic and printed in large quantities, so they spread in no time throughout Europe, reaching even Switzerland’s furthest mountain valleys.