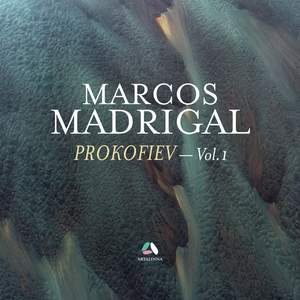 For this solo album for Artalinna, Cuban pianist Marcos Madrigal plunges into the protean universe of Sergei Prokofiev. Two Sonatas, the well-known Seventh and the more discreet Fifth, frame the sumptuous collection of Visions Fugitives. Throughout this recital, Marcos Madrigal demonstrates his scrupulous respect for the score. Prokofiev’s keyboard works span his entire career, from his initial studies at the St. Petersburg Conservatory until his death in 1953. It includes eleven piano sonatas (two of which have remained unfinished, and several were destroyed during the years of training), sixty small pieces, either isolated or grouped together in a cycle such as the Visions Fugitives, as well as transcriptions of his ballets.