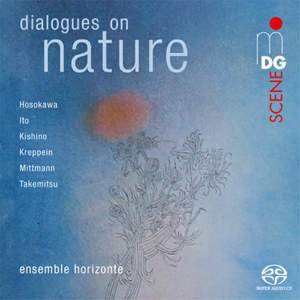 For 30 years, Ensemble Horizonte has been intensively engaged in the audience-pleasing performance of contemporary music. On its debut release on MDG, the eight soloists present Japanese-German "Dialogues on Nature".

The project, rich in associations, evokes echoes of German Romantic nature poetry as well as finely chiselled Japanese ink drawings; the forces of nature and the magic of nature sometimes lie close together in the new and latest compositions.

Toshio Hosokawa's "Beside the River" refers to Hesse's "Siddharta"; Jorg-Peter Mittmann's "Jenseits der Blaue" hovers in the ethereal borderland of the perceptible and the memory of the devastating tsunami of Fukushima is naturally present.

Tthe juxtaposition of idyllic landscape, raw violence and fragments of folk songs wafting from memory gets deep under the skin in Malika Kishino's "Lamento". Her "Aqua Vitae II", on the other hand, brings the sounds of musique solidly back into classical musicmaking, which demands a lot from the performers with its extremely differentiated playing techniques and unusual instruments.

From solo to octet, the Ensemble Horizonte, founded in 1990,presents a fascinating range of expression on this album.