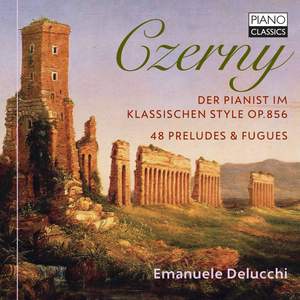 No. 1, Prelude in C Major: Allegretto

No. 3, Prelude in A Minor: Allegro animato

No. 4, Fugue in A Minor: Allegro moderato

No. 29, Prelude in B Major: Allegro vivace

No. 30, Fugue in B Major: Moderato e maestoso

No. 37, Prelude in A Major: Allegro commodo vivace

No. 38, Fugue in A Major: Allegro risoluto

No. 39, Prelude in F-Sharp Minor: Allegro

No. 43, Prelude in B Minor: Allegretto affettuoso

No. 44, Fugue in B Minor: Andante cantabile, poco moto

Carl Czerny, a famous pianist and teacher, student of Beethoven, wrote an immense oeuvre for the piano, in which his prodigious technique could be shown to the greatest advantage. His many didactical works, the Etudes, are daily fare for every aspiring young pianist, cruel but nourishing! Czerny’s Op.856 contains 48 Preludes and Fugues in all major and minor keys. The interest that Czerny nurtured for the fugue, especially regarding the piano, unquestionably derived from his familiarity with Bach’s Well-Tempered Clavier, a collection that was widely admired at the time and closely studied by the youthful Carl during the period of his early lessons with his father, himself a pianist and teacher. The importance that Czerny attributed to a genre that was actually beginning to lose favor among audiences also relates to the fact that the Well-Tempered Clavier had likewise been fundamental for Beethoven, who was shortly to become Czerny’s teacher and in due course also his friend.

The Preludes and Fugues are the Romantic’s answer to an obsolete form, imbuing the formal counterpoint with many new pianistic devices of Czerny’s own invention.

Played on a Pleyel piano from 1853 by Emanuele Delucchi, one of the most remarkable pianists of his generation. He has the technique and style to master these difficult pieces. He made a name with his recordings for Piano Classics of the insanely difficult Chopin Studies by Godowsky, played on a 1906 Steinway D, of which the Gramophone wrote: “Its palette of warm colors remained intact but gained a more incisive attack, allowing Delucchi’s voicing and extraordinary digital facility to be heard at its best…’. “Delucchi is in a class of his own”, Jed Distler of Classicstoday.com wrote: “9/9: every inch a viable contender to the reference versions”.