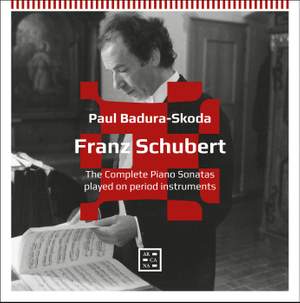 After the tremendous success of the complete Beethoven piano sonatas, Arcana re-releases the companion set of Schubert sonatas with a new design and the addition of the indispensable booklet notes written by Paul Badura-Skoda. An absolute must-have, the ‘Desert Island Schubert’ according to Diapason magazine.

For as long as he could remember, Paul Badura-Skoda always felt an intimate bond with Schubert’s music. At a time when knowledge of the composer was still very sketchy, he scrutinised the princeps editions and manuscripts in order to track down errors and to establish Urtext versions which are regarded as reference editions today. But beyond that, he was able to complete certain movements that Schubert had left unfinished, though without introducing music foreign to the composer. In the exhaustive essay which he made a point of writing for this complete recording, we can read with profit, sonata by sonata, the nature of the work he accomplished. The choice of period instruments responds to a search for colours and sound ranges favouring a greater intimacy with the composer’s music, permitted by the use of only those instruments which Schubert knew and played and for which he actually wrote his music.Yet what is most striking is the sense of identification between the performer, Badura-Skoda, and the composer, Schubert. In this recording of the complete piano sonatas on period instruments, made in Vienna between 1991 and 1996, the Viennese maestro gave us the result of a lifetime’s work: Schubert’s music with his passion, his suffering, and that inimitable tone which makes his native city the place so essentially and existentially identified with music.