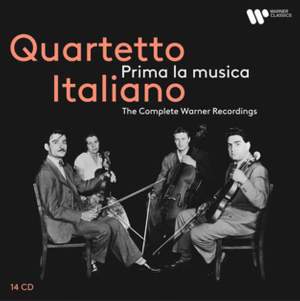 Scarlatti, A: Sonata a quattro in D minor

“The finest string quartet, unquestionably, that our century has known.” In 1951, when the Quartetto Italiano first visited the USA, composer Virgil Thomson’s was enthused: “Perfection is the only word to describe this playing.” The quartet’s members, who had met while studying in Siena, made their ensemble debut in 1945. They went on to enthral audiences around the world with interpretations of proverbial beauty, insight and architectural elegance. In this collection, presenting their entire Warner Classics discography, their subtle mastery is as evident in essential Austro-German repertoire as in Italian music spanning five centuries and works by Debussy, Ravel, Milhaud, Prokofiev and Stravinsky. Complementing the catalogue they built between 1953 and 1959 is their very first recording, made in 1946 when they were still known as the Nuovo Quartetto Italiano. The collection, entirely remastered, features a number of recordings appearing on CD for the first time.