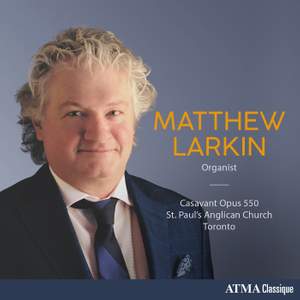 ATMA Classique is pleased to present the label debut of Canadian organist Matthew Larkin. Recorded on the Opus 550 Casavant Organ at St. Paul Anglican Church in Toronto, this two-disc organ recital showcases the remarkable scope and beauty of one of North America's signature pipe organs.

Larkin's recital offers a vast range of periods and styles, including music by composers ranging from Bach to Keith Jarrett, along with works by Canadians Healey Willan, Ernest Macmillan, and Andrew Ager.

"In selecting repertoire, my aim was to feature not only the majestic power of the instrument, but its ability to speak to the whole range of human emotions," says Larkin.

The organ was built in 1914 by Casavant Freres. As was the case with many larger installations in Canada, the instrument saw several changes over the years: a new console was installed in 1956, with stops subtracted to make way for more than twenty new ones. Nothing of the original tonal character has been lost, and the instrument sounds brighter and more lively thanks to the changes and the improvements in sound egress. One of Canada's most influential liturgical musicians, Matthew Larkin has held appointments in Toronto, Ottawa, and Victoria, and was director of music at Christ Church Cathedral, Ottawa, for fifteen years. His recital work has taken him worldwide, and his collaborative projects have produced commercially successful recordings on several labels. Larkin is a Fellow of the Royal Canadian College of Organists and has served as a member of its Examinations Committee.