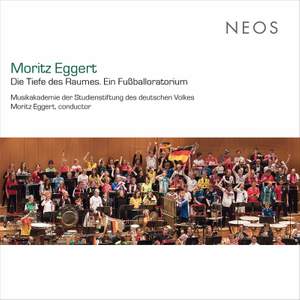 Moritz Eggert's football oratorio "Die Tiefe des Raumes" was originally part of the cultural program for the 2006 World Cup. Now over 100 young musicians and singers have brought the work back on stage at the Philharminie in Munich under the direction of the composer. The live recording of this concert appears here as a double CD.

In a good 90 minutes - two halves plus preliminary report and injury time - "Die Tiefe des Raumes" deals with football, fans and officials. "Of course, a topic like football is a great opportunity for a composer to reach an audience that you would not otherwise have for new music," said Moritz Eggert.

The performance documented here was initiated by the Music Academy of the German Academic Scholarship Foundation. Not only the choir and orchestra consist of current and former scholarship recipients, the soloists and the participating lecturers are also mostly alumni of the foundation.