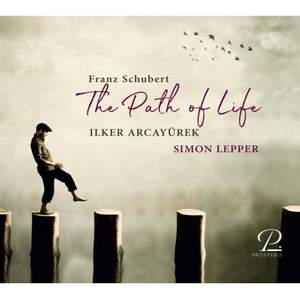 Franz Schubert: The Path of Life

Arcayurek’s tenor voice has a pleasing baritonal hue to it, and there’s plenty of dramatic oomph when necessary, too. — BBC Music Magazine, August 2021, 4 out of 5 stars More…

‘The Path of Life’ is a setting of Schubert songs starting from the joyful sides of life with up and downs and ending in a slower and more profound tone. An unusual program performed by young Austrian-Turkish tenor Ilker Arcayurek, one of the most promising Liedersingers of his generation.

Born in Istanbul and raised in Vienna, tenor Ilker Arcayurek has emerged as one of the most exciting and versatile vocal artists in recent years. Hailed by the press for his “golden tenor” (Opera Now Magazine) and quick- ly establishing himself “in a class of his own” (The Guardian). He is a winner of the International Art Song Competition of Germany’s Hugo Wolf Academy, a finalist of the 2015 BBC Cardiff Singer of the World and was a BBC Radio 3 New Generation Artist. Simon Lepper read music at King’s College, Cambridge before studying col- laborative piano with Michael Dussek at the Royal Academy of Music in Lon- don. Specialising in song accompaniment, he has regularly collaborated with sing- ers from across the world and since 2003 has been the official accompanist for the BBC Cardiff Singer of the World Competition. ‘Simon Lepper, whose prowess as a pianist is fused with a real sensitivity to words and to the voice, is a rarity indeed.’ - The Times

Arcayurek’s tenor voice has a pleasing baritonal hue to it, and there’s plenty of dramatic oomph when necessary, too.

Tenor and pianist work seamlessly throughout to produce performances that are wonderfully atmospheric and communicate music and text instinctively and powerfully.