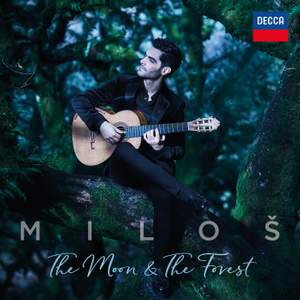 The Moon & The Forest

Not many musicians become popular enough to be identifiable by their first name alone. That the Montenegrin guitarist Milo Karadaglic has achieved this is testament to his charismatic brilliance... — BBC Music Magazine, July 2021, 3 out of 5 stars (Performance) / 4 out of 5 stars (Recording) More…

Interview,  Miloš Karadaglić on The Moon and the Forest

A decade after MILOŠ took the globe by storm with his sensational debut album, Mediterráneo, the world’s favourite guitarist presents a dazzling new album featuring two world premiere guitar concertos written specially for him. The Forest was written by legendary Canadian film composer Howard Shore (Lord of the Rings, The Hobbit, and more recently Pieces of a Woman). The premiere of Ink Dark Moon by the multi-disciplinary British US-based composer Joby Talbot at the 2018 BBC Proms marked MILOŠ' return to the stage following his injury.

Not many musicians become popular enough to be identifiable by their first name alone. That the Montenegrin guitarist Milo Karadaglic has achieved this is testament to his charismatic brilliance as well as his cross-genre mainstream appeal. Both qualities emerge through this album of specially commissioned concertos by Howard Shore and Joby Talbot.

Premiere recordings of two dazzling new concertos which offer new perspectives on the relationship between guitar and orchestra, performed with considerable conviction and élan.

In its journeys from poetic intimacy to high-energy rhythmic finale, Talbot’s work is idiomatic, meticulously detailed, the balance between soloist and orchestra well-achieved.