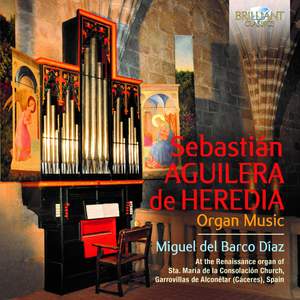 Miguel del Barco Diaz is a superb exponent of this music, drawing an enchanting array of colors out of the instrument and playing with impeccable style, being vivacious or tender as required.... — Fanfare, Jan/Feb 2022 More…

The booklet contains liner notes by the artist about the composer and works, a biography of the artist, and information about the organ including a stop list

Sebastián Aguilera de Heredia has gone down in history of Spanish music as one of the most important figures of the transition from the Renaissance to the Baroque, comparable to the Dutch composer Jan Pieterszoon Sweelinck (1562-1621), who was his contemporary. His style reflects the polyphonic tradition of the Spanish Renaissance combined with elements of the early Baroque, thus forming the bridge between Antonio de Cabezón (1510-1566) and Francisco Correa de Araujo (1584-1654), the most important exponents of the organ school in Spain in the Renaissance and the Baroque respectively.

Aguilera adopts a style in which the serious counterpoint of vocal polyphony, of which he was an accomplished master, is infused with elements from popular music and dance forms and rhythms.

Played by Miguel del Barco Díaz, a specialist in early Spanish organ music, on the only surviving historic organ from the time of De Heredia, the Renaissance organ of Santa María de Garrovillas de Alconétar, Cáceres, Spain, the technical specifications of which are included in the booklet.

Miguel del Barco Diaz is a superb exponent of this music, drawing an enchanting array of colors out of the instrument and playing with impeccable style, being vivacious or tender as required. The proceedings are well recorded...This disc is a lovely find; highly recommended.