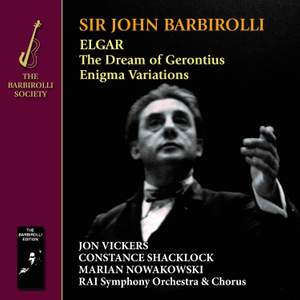 In this live recording from Rome in 1957, Barbirolli inspired his three international soloists – the Canadian-born Jon Vickers (Gerontius), the British contralto Constance Shacklock (the Angel), and the Polish bass Marian Nowakowski (the Priest and Angel of Agony), as well as his Italian chorus and orchestra, to come together in a moving and intense account of The Dream of Gerontius.

The RAI choir is very good, singing with firm sound and the essence of Newman’s text is fully conveyed. The depth of feeling is also both compelling and very moving – not least for Jon Vickers’ Gerontius – one can almost sense his delivery of the eponymous solo part adds a further layer of intensity to the choral singing – each member of the choir must have been individually inspired by him through taking part in this performance, sympathetic to the inherent Catholicism of Newman’s text.

In November 1960, Barbirolli was back in Italy, in Turin, for a performance of Elgar’s Enigma Variations. This score would not have been quite the unknown quantity that The Dream of Gerontius would have been in Rome three years earlier. The Turin orchestra was a very good one – it was known to UK record collectors through Decca recordings – and what we have claimed as the ‘internationalism’ of Elgar’s work was familiar to the greatest conductors of the age. It is clear, from the opening statement of the ‘Edward Elgar’ theme, that the Turin orchestra were with Barbirolli all the way, from the delicacy of the H.D.S.-P. and Dorabella variations to the energy of G.R.S. the immortal nobility of ‘Nimrod’, and the crowning glory of the self-portrait ‘EDU’. The result is a finely coherent performance, an incomparable interpretation of a genuine international masterpiece