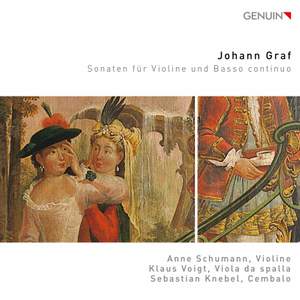 Johann Graf's life dates are almost identical to those of Johann Sebastian Bach. The Rudolstadt court Kapellmeister was one of the most esteemed violinists of his time. Violinist Anne Schumann, violist Klaus Voigt, and harpsichordist Sebastian Knebel are now releasing a CD on GENUIN featuring his violin sonatas, which, although significant in music history, have rarely been performed. The works include passionate and virtuosic music in the Italian style, to which Klaus Voigt, in particular, gives a striking coloration: He supports the swinging and clear violin playing of Anne Schumann with the viola da spalla, a kind of small cello held with a strap in front of the belly.