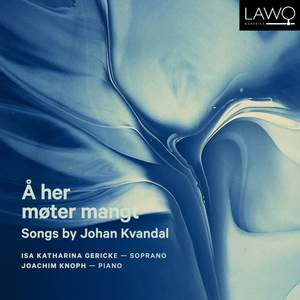 Offer, A Her Moter Mangt - Songs By Johan Kvandal

“Kvandal heading for stardom” proclaimed local northern newspaper Helgeland Arbeiderblad when Johan Kvandal’s name first materialised in a radio program in August of 1940. The backdrop for this announcement was that several of Kvandal’s songs were performed on the radio program “Young and New”. Listeners were promised to expect a precocious talent in the following show, and the Haugtussa songs found on this recording confirm that this 20-year-old clearly knew his craft and the music has proven to withstand the test of time. Throughout the 1950s and 60s, Kvandal focused on composing chamber music, concerts and sym- phonic music. He continued to compose music for lyrics, but taking on the position of organist at and Oslo church iinspired him to embrace biblical and religious texts. However, his tonal constancy was the bedrock for everything he wrote. Not even during the mid-1960s avant-gardism was he led off-track. It can therefore be said that there is a common thread in his vocal music, from the very first songs of 1939 up until the Knut Hamsun opera Mysteries in 1993, by which time his many years of experience in writing melodies for voice had reached its peak. Isa Katharina Gericke is known as a versatile and colourful artist in concert, chamber music and opera; her solo engagements have included collaborations with Oslo Philharmonic Orchestra, Akademie fur alte Musik Berlin, the BBC Symphony Orchestra, Czech Philharmonic Orchestra with conductors Sir Andrew Davies amongst others. She is accompanied by pianist Joachim Knoph, an active soloist and chamber musician who has performed in a number of countries.