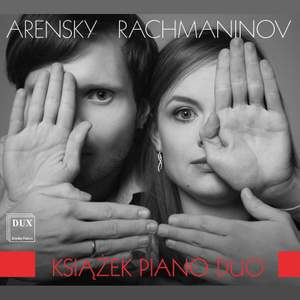 Represented by the Ludwig van Beethoven Association, the Ksi 261; 380;ek Piano Duo is one of the most interesting piano duos in the world; the ensemble is made up of two outstanding Polish pianists, Agnieszka Zahaczewska-Ksi 261; 380;ek and Krzysztof Ksi 261; 380;ek. Since 2012, which marks the beginning of their cooperation, the multi-award-winning duo has given a number of concerts in Switzerland, France, Thailand, Great Britain and South Africa, winning recognition of the audience and critical acclaim. The present album contains works for two pianos by Anton Arenski and Sergei Rachmaninoff, which play an important role in the compositional legacy of both artists. In both cases, the formation of two pianos is an individually-approached creation, although in the case of Rachmaninoff it manifests itself to an exceptional extent; the said creations feature a piano technique using a wide range of possibilities and advantages of the instrument, a technique that both composers perfectly understand.