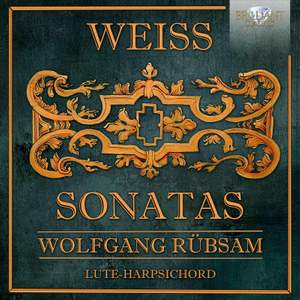 Rübsam’s notes tell us that he is playing in a cantabile style. He is willing to use rubato, that is, and is dedicated to making the music sing. He is particularly effective in slower movements... — Fanfare, Jan/Feb 2022 More…

I. Overture [arr. For lute-harpsichord]

I. Andante [arr. For lute-harpsichord]

I. Allemande [arr. For lute-harpsichord]

I. Allemande [arr. For lute-harpsichord]

I. Prelude [arr. For lute-harpsichord]

- The booklet contains liner notes on the composer and his music, as well as information about the instrument used

- Weiss was one of the most important and most prolific composers of lute music in history. He wrote around 600 pieces for lute, most of them grouped into “sonatas" (not to be confused with the later classical sonata, based on sonata form) or suites, which consist mostly of Baroque dance pieces. Weiss also wrote an extensive repertory of chamber music, lute duets, and concertos, but only the solo parts have survived; in every case the parts that accompany the solo lute are lost.

- The present recording is played on a lute-harpsichord built for Mr. Rübsam in 2015 by the acclaimed American instrument-maker Keith Hill. It consists of one manual with one set of eight-foot gut-strings, and two sets of jacks which pluck the strings in two different places. One, positioned farther from the nut, produces a fluty sound, and the other, closer to the nut, produces a more nasal timbre. A second set of brass four foot strings gives a halo-effect by resonating with the registers that are played by the performer. It causes the rather dry sound of the gut strings to have a much more singing quality of tone.

- Wolfgang Rübsam has an immense discography to his name. His more than 100 recordings include organ and harpsichord works from the Baroque and the Romantic era. He gives frequent recitals and masterclasses in the United States and Europe and has served on the juries of the most prestigious international competitions.

Rübsam’s notes tell us that he is playing in a cantabile style. He is willing to use rubato, that is, and is dedicated to making the music sing. He is particularly effective in slower movements like the Andante in the Sonata in G.