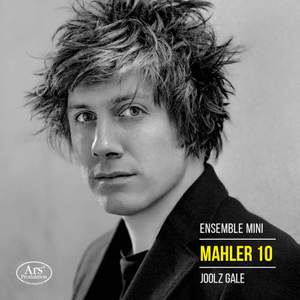 Gustav Mahler's death left his Tenth Symphony unfinished, consisting only of an unfinished score and several sketches. Ensemble Mini, a radical collective of soloists from Germany's finest orchestras, presents Michelle Castelletti's fascinating recreation of the work - one of the most powerful sound creations ever written - in a version for chamber ensemble. They say of themselves: 'Small is beautiful. In these tough financial times, exploring great music in mini ways cannot be more relevant. No longer can the fat-cat orchestras sit back and relax: Ensemble Mini is the carbon-neutral and environmentally-friendly answer to classical music. We present big symphonic composers with no strings attached; no silly hang-ups, just pure, unadulterated music. Our mission to re-discover great composers through the mini-orchestra is a concept that originally took hold in Arnold Schoenberg's Verein fur musikalische Privatauffuhrungen, Wien (1918-21). But now we take this tradition into the 21st Century, not only by reviving the original arrangements but by also performing and commissioning new ones. Ensemble Mini can prove that big symphonic music doesn't have to be big. As one critic has already pointed out, 'small is the new big'." "The huge symphonic abundance of tone colours that survives inside the Berliner Philharmonie Kammermusiksaal is thanks to the intensity of playing ignited by Joolz Gale." - Der Tagesspiegel