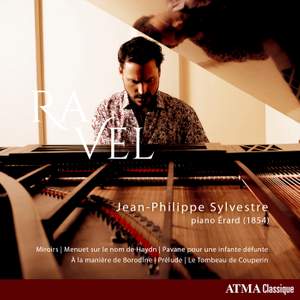 Canadian pianist Jean-Philippe Sylvestre performs works for piano by Maurice Ravel, recorded on an Erard piano built in 1854. "The concept and performance of a work are affected by the instrument one plays," says Jean-Philippe Sylvestre. "To bring out the Baroque character of two pieces, Le Tombeau de Couperin and Menuet sur le nom de Haydn, I wanted a piano with harpsichord-like articulation and sonority. That is why I decided to record this album on an Erard, a very special piano whose sonority and vibrations recreate the sounds, soul and mood of the time of Ravel and of the first Impressionists." Jean-Philippe Sylvestre has appeared at the prestigious Concertgebouw in Amsterdam, plus all the major concert halls across Europe as well as the National Arts Centre in Ottawa. He is a regularly invited soloist with the Orchestre Metropolitain, the Orchestre symphonique de Quebec, the Orchestre symphonique de Laval, and the Orchestre symphonique de Longueuil.