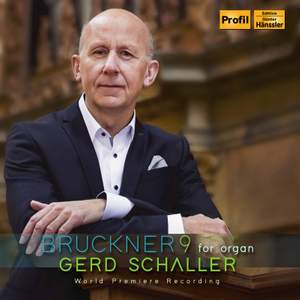 Symphony No. 9 in D Minor

"Gerd Schaller: ""The reason for this transcription was simply that - once again - I had been busy with the Ninth, this time with the intention of arriving at the essence of the work: I wanted to understand Bruckner even better, come to grips with the architecture of his symphonic thought. The organ i s Bruckner's instrument, which stayed with him all his life. have never seen the organ as a substitute for the orchestra. And so when I wrote my transcription I was not at all interested in transferring orchestral effects to the organ."" ""When in 1984 the Passau organ workshop of Wolfgang Eisenbarth was called upon to rebuild the Ebrach organ, he augmented the two Baroque departments on the first and second manuals with two further organs, a Romantic Schwellwerk and a Bombardwerk. Thus the Eisenbarth organ now boasts 56 stops on four manuals and pedal - and in my view is admirably suited to Bruckner's Ninth."" Gerd Schaller is one of the most significant Bruckner conductors of our ti me. He is in constant demand from leading ensembles, concert halls and opera houses at home and abroad as guest conductor. Along the way, in 2008, he founded Philharmonie Festiva, a symphony orchestra with which he pursues his own ambitious projects. Among them his large-scale project BRUCKNER2024, in which he aims to record all Bruckner's symphonies to CD from his personal perspective by the composer's bicentenary in 2024"