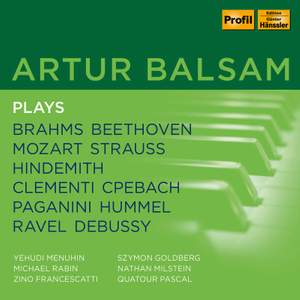 "Pianist and music teacher Artur Balsam was born in Warsaw on February 81 1906. After his academic studies Balsam matured into a sought-after partner at the piano: having won the Mendelssohn Prize 1931 together with the violinist Roman Totenberg, he toured the USA the following year with the brilliant young Yehudi Menuhin. He married Ruth Miller, who was a lso a todz pianist, in 1933. After the rise to absolute power in Germany of Adolf Hitler, Balsam emigrated to the United States . He was the pianist of the NBC Symphony Orchestra under Arturo Toscanini for five years. As a soloist, he favoured the Classical repertoire and the music of the 19th century. Balsam loved to play Mozart and wrote his own cadenzas for several of Mozart's piano concertos. He recorded all the solo piano music of Mozart and Haydn. Artur Balsam's discography falls just short of 250 recorded works. Teaching was another part of his career. He taught at Boston University's Eastman School of Music and at the Manhattan School of Music He died of a lung infection in Mount Sinai Hospital in New York City on September 1, 1994. This comp ii ati on presents the many-faceted musician in all his manifestations: as solo pianist, chamber musician and soloist with orchestra."