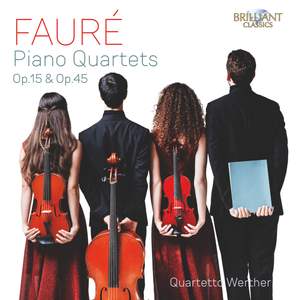 Fauré's two Piano Quartets count among his best known and most frequently performed chamber music works. They are exquisitely crafted works, in which romantic, passionate melodies seamlessly fit into their classical forms while displaying luxurious late-Romantic textures. The musical language of Fauré is a unique and highly personal fusion of Brahmsian textures and the mercurial, floating melos of Debussy and Ravel, neither of which composers are literally quoted or even traced.

The Italian Quartetto Werther was formed in 2016 and has already won several important chamber music competitions, and appeared at international festivals.