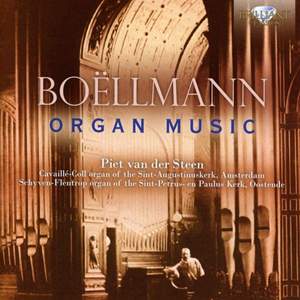 Boëllmann was born in Ensisheim, Haut-Rhin, Alsace, the son of a pharmacist. In 1871, at the age of nine, he entered the École de Musique Classique et Religieuse (L'École Niedermeyer) in Paris, where he studied with its director, Gustave Lefèvre, and with Eugène Gigout. There, Boëllmann won first prizes in piano, organ, counterpoint, fugue, plainsong, and composition. He became organist titulaire of the Church of St. Vincent de Paul in the 10th arrondissement of Paris, a position he held until his early death, probably from tuberculosis.

Boëllmann's style is deeply rooted in the French organ tradition, especially by Franck and Saint-Saëns. His music makes full use of the enormous possibilities of the French organs built in his lifetime.

This recording presents the famous Suite Gothique (with the notorious Toccata!), selections from Douze Pièce pour Orgue Op 16 and Heures Mystiques as well as the 2nd Suite for organ Op. 27.

Played on the Schyven-organ (later restored by Flentrop) in the Petrus-en-Paulus-Kerk in Oostende (Belgium) and the Cavaillé-Coll organ of the Augustinus Church in Amsterdam.

Played by Piet van der Steen, one of the most remarkable and famous Dutch organists of the 20-the century. This beautiful recording dates from 1977 and 2002, and has lost nothing of its freshness and power.