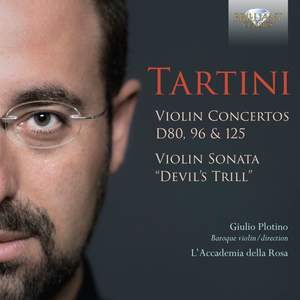 Tartini: Concerto in A major, D.96

Giuseppe Tartini (Pirano d'Istria 1692 - Padua 1770) was a virtuoso violinist, composer, theoretician and teacher, a spider in the international cultural web in a time when Italy was the centre of the musical world, his violin school, the 'School of Nations', attracted musicians from all over Europe.

Tartini wrote 125 concertos for his own instrument, the violin, attractive and melodious works full of bold harmonies and featuring brilliant solo parts that freely converse with individual voices within the orchestra.

Tartini's most famous work is the 'Devil's Trill Sonata' a solo violin sonata that requires a number of technically demanding double stop trills and is difficult even by modern standards. According to a legend embroidered upon by Madame Blavatsky, Tartini was inspired to write the sonata by a dream in which the Devil appeared at the foot of his bed playing the violin.

Italian violinist Giulio Plotino, winner of several international competitions, was concertmaster of the London Philharmonic Orchestra, the Scala di Milano Orchestra and several others. He is equally at home with period instruments ensembles as with modern orchestras. He plays a 1751 Gagliano violin.

The Strad wrote about him: 'hats off to Giulio Plotino who negotiates even the most fiendish intricacies on Paganini's del Gesù with rare aplomb'.