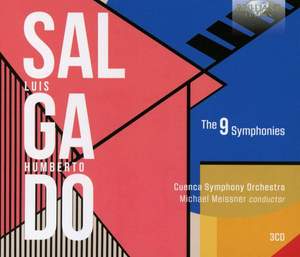 Salgado: Symphony No.3 'In Rococo Style'

· Luis Humberto Salgado (1903 - 1977) was an Ecuadorian composer. He was regarded as one of the most influential and prolific composers of his country.

· He studied at the National Conservatory of Music, which his father Francisco Salgado had founded, and from where he graduated in 1924. He was both a teacher and twice, the director of the institution.

· Luis Salgado composed nine symphonies, four operas, an opera-ballet, an operetta, five ballets, and eight concertos, as well as chamber music, piano works, songs, and choral music, in addition to many pieces of Ecuadorian folk music, always with significant innovations. He extracted melodic motifs, rhythms, and harmonies from traditional Ecuadorian music, integrating them into a style both unique and universal, which he developed from their folkloric beginnings to a highly personal language. His music is vibrant, energetic, full of drive and Latin-American passion and lyricism while his orchestrations are extremely colorful and innovative.

· This first recording of the complete 9 symphonies is a labor of love and honor for the Cuenca Symphony Orchestra, conducted by Michael Meissner. The performances are of the highest international standards and the musicians play their hearts out for their compatriot composer.

· A major discovery of an original and exciting 20th century composer!