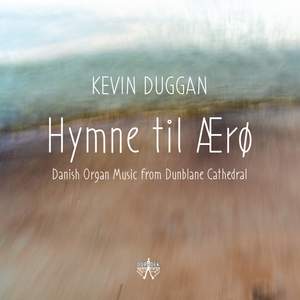 Thybo: Sumer is icumen in

Kevin Duggan is an outstanding organist who performs a meticulously selected and beautiful array of Danish works on the magnificent Flentrop organ of Dunblane Cathedral. 'Hymne til Aero' takes its title from a work of the same name composed by Duggan after his time living on the Danish island of Aero. The piece is one of two world-premiere recordings of Duggan's music featured on this release.

Aero's low hills, whitewashed churches and the Baltic Sea, combined with Dunblane's poetic Flentrop organ, have inspired this musical evocation of Denmark. Two sublime works frame the album: the Prelude and Fugue in E minor by Nicolaus Bruhns and Carl Nielsen's 'tour de force, Commotio'. These works are well known outside Scandinavia, whereas the elegantly crafted music of composers such as Jesper Madsen and Leif Thybo may be less familiar but are deserving of a wider audience. As Duggan puts it in the album booklet, these shorter pieces "create a mood like sunlight shining through a window, whilst also evoking brooding skies and bucolic folk songs. There is often a connection to the Baroque era filtered through the prism of the Lutheran church."

The Flentrop organ of Dunblane Cathedral is an ideal medium for this colourful, eloquent music. Duggan describes it as "an instrument of musical integrity which breathes and sings."

Kevin Duggan is a versatile musician whose career embraces performance, composition and choral direction. Since 2015 Kevin Duggan has been Director of Music at Dunblane Cathedral, Scotland and Musical Director of the Rosenethe Singers. He also directs the choir Nordic Voices.