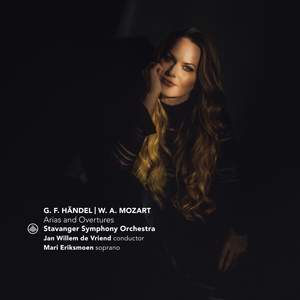 Forget the less than perfect presentation and enjoy the top-drawer singing. — Gramophone Magazine, May 2021

Handel: Oh! had I Jubal's lyre (from Joshua)

The profile of Norwegian soprano Mari Eriksmoen continues to rise through her regular appearance on Europe’s major opera, concert and recital stages where she is consistently praised for her compelling blend of radiant stage personality and purity of vocal tone.

This is her first opera arias recital and is focused on Handel and Mozart. This joyful album also marks the first recording of Challenge conductor Jan Willem de Vriend with the Stavanger Symphony Orchestra.

Forget the less than perfect presentation and enjoy the top-drawer singing.