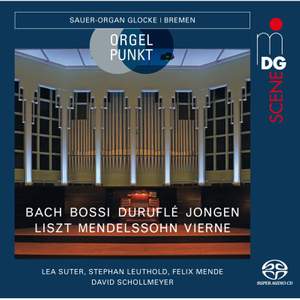 * First Recording on the Sauer Organ Bremen 'Die Glocke'* When in 1928 the great organ in the Bremen "Glocke" was handed over to the concert public, the critics were full of praise for the successful symbiosis of the excellent instrument from the renowned Sauer workshop and the outstanding acoustics of the concert hall. The organ has survived war and destruction almost unscathed and was thoroughly restored a few years ago after an extended sleep. Now this instrument, which is uniquely preserved in Germany, has been honoured for the first time on Super Audio CD and shows that it is capable of "perfectly reproducing the literature of past times as well as that of the present". Organists Stephan Leuthold, Felix Mende, David Schollmeyer and Lea Suter play music from Johann Sebastian Bach to Maurice Durufle. And indeed, Sauer also built typical stops into his ultra-modern instrument based on models from Praetorius and Silbermann, so that the "Old Masters" can be played appropriately. The Sauer organ of the Bremen "Glocke" is probably the only preserved instrument of its kind - at least in Germany. The exemplary disposition is shown to its best advantage in the sound-sensitive registrations of the four master organists - best experienced in the three-dimensional reproduction of this Super Audio CD, produced in finest acoustics with great attention to detail.