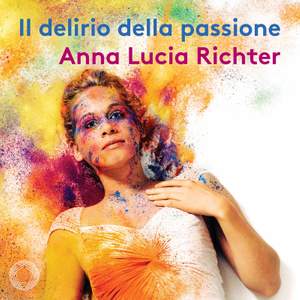 Richter’s declamatory storytelling reaches an impressive peak in the Lamento d’Arianna where every device of characterisation and emotional evocation is brilliantly deployed, including a collapse... — BBC Music Magazine, May 2021, 4 out of 5 stars More…

The German soprano talks about her recent all-Monteverdi album with Luca Pianca and Ensemble Claudiana, and discusses the beginning of a new chapter in her vocal career.

Anna Lucia Richter returns to PENTATONE after her acclaimed Schubert album Heimweh with Il delirio della passione; a recording full of Monteverdi treasures, from heart-wrenching opera scenes (Lamento d Arianna,Pur ti miro from Poppea and the Prologue of L'orfeo) and religious music (Confitebor) to bucolic songs (Si dolce è il tormento). Richter works together with Ensemble Claudiana and Luca Pianca, one of the most eminent Monteverdi interpreters of our age. They offer a fresh perspective on Monteverdi's music by penetrating deeply into the original sources. Their interpretation of the famous Lamento d'Arianna, salvaged fragment of the lost score of the opera L'Arianna, is exemplary in that regard. Richter's passionate delivery is inspired by what precedes in the libretto, while Pianca has composed short, madrigalistic instrumental interludes between the solo sections, replacing the choral commentaries, of which only the original texts have survived. Altogether, the pieces on Il delirio della passione demonstrate Monteverdi's exceptional skill to express the most complex emotions, in music of timeless beauty. Anna Lucia Richter belongs to the most exciting young singers of her generation. Il delirio della passione is the second fruit of her exclusive collaboration with PENTATONE, after Heimweh (2018), and her last soprano recording, as she will continue her career as a mezzo-soprano. Luca Pianca and Ensemble Claudiana both make their PENTATONE debut.

Richter’s declamatory storytelling reaches an impressive peak in the Lamento d’Arianna where every device of characterisation and emotional evocation is brilliantly deployed, including a collapse into speech towards the end…this selection provides a fresh and unusual look at many Monteverdi favourites.

Even though it concentrates on one composer, this disc is a showcase for an accomplished soprano, putting together a diverse selection of his music. So it depends on your interest in hearing Richter. I say give her a listen, for she is a real talent.

A new and focused voice, richly varied in its tonal palette, unafraid to exploit the full gamut of human emotion so dramatically etched by the composer.

Richter’s soprano is true and bright and when she does unleash it, as in the sacred aria ‘Confitebor tibi Domine’, it rings out pleasingly. The long ‘Lamento’ from the otherwise lost L’Arianna is profound and shows Richter’s art at its best: detailed, luminous and heartfelt.