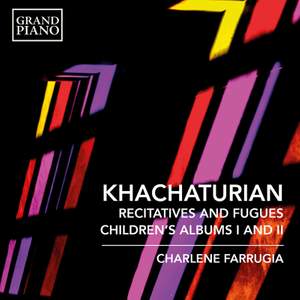 Children's Albums I and II

No. 5, Playing the Tambourine

Khachaturian was considered the mouthpiece of the entire Soviet Orient and remains the most renowned of 20th-century Armenian composers. His unmistakable style came with an urge to invent new forms that reconciled Western practice with Eastern idiom. His apprentice Fugues were revised and enriched with Recitatives that conjure the colourful voices of Khachaturian's childhood in Tbilisi. Refreshingly original, amusing and provocative, the Childrens Albums belong to a tradition that reaches back to Bach, Schumann and Tchaikovsky.