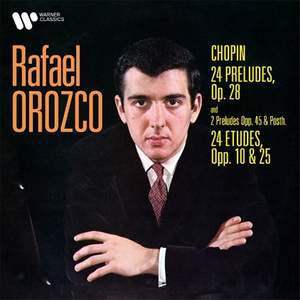 Winner of the Leeds Piano Competition at the age of just twenty, Rafael Orozco exemplified a new generation of virtuoso pianists who favoured musical expression over spectacular display. His Chopin interpretations were truly revelatory, finding poetry not only in the Préludes but also in the Études. Remastered from the original tapes in 24-bit/192kHz, this double album captures the rare occurrence of a Spanish pianist tackling two all-encompassing collections in which the essence of Romanticism is distilled – a precious souvenir of the impeccable artistry of a star of late twentieth-century pianism.