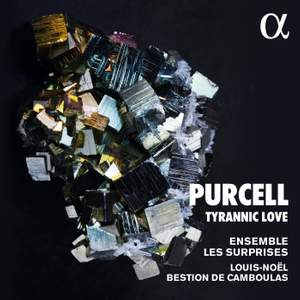 The theme is love, but there’s nothing coy or sugary about either music or performances that embrace extremes of emotion and expression...Much of this is theatre music, and in the absence of... — Gramophone Magazine, February 2021 More…

Eccles, J: I burn my brain consumes to ashes

Purcell: The Prophetess, or the History of Dioclesian, Z. 627: Dance of the Furies

Dance for the Fairies

Dance for the Green Men

"Seek Not to Know"

Blow: Saraband for the Graces (from Venus and Adonis)

Purcell: There's Nothing So Fatal As Woman (from A Fool's Preferment, Z571)

Purcell: So when the glittering Queen of Night

Clarke, Jeremiah: Ground in D minor (from Song on the Assumption)

Purcell, D: My Dearest, My Fairest (from Pausanias, the Betrayer of his Country, Z. 585)

Purcell: Hark! My Damilcar (from Tyrannic Love, or the Royal Martyr, Z. 613)

Until the late 1680s, Henry Purcell composed almost exclusively for the royal court. But when the monarchy decided to reduce its expenditure on music in 1690, he joined the United Company, a London theatre company, and devoted himself to composing for its productions. These took varied forms, with operas such as King Arthur (1691), The Fairy Queen (1692) and The Indian Queen (1695) but also spoken plays with music, such as The Virtuous Wife (1695). It is excerpts from these works that are presented in Tyrannic Love. Compositions by Purcell's colleagues or followers John Blow, John Eccles, Jeremiah Clarke and Daniel Purcell complete the programme. This recording marks the beginning of the collaboration between Alpha and the ensemble Les Surprises, founded in 2010, which takes its name from Les Surprises de l Amour by Rameau, the group's emblematic composer. Under the artistic direction of Louis-Noël Bestion de Camboulas, who is also an organist and harpsichordist, the ensemble presents innovative interpretations and explores the rich orchestral sonorities made possible by the use of Baroque instruments.

The theme is love, but there’s nothing coy or sugary about either music or performances that embrace extremes of emotion and expression...Much of this is theatre music, and in the absence of a stage Les Surprises supply all the drama...There’s delight after delight here, both in repertoire – which includes plenty of lesser-known treasures – and performances. This is one French invasion to welcome with open arms.

Directed by Louis-Noël Bestion de Camboulas, with singers Eugénie Lefebvre and Etienne Bazola, the group take a brisk approach, but are capable of intimacy too, giving a sympathetic account of Blow’s air Poor Celadon.