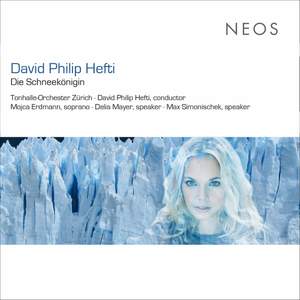 David Philip Hefti composed his second music theater work based on motives by Hans Christian Andersen: "Die Schneeknigin" (The Snow Queen). The plot centres upon the children Gerda and Kay, whose friendship is put to a severe test when Kay falls under the spell of the Snow Queen. Hefti's high-contrast music creates sometimes shimmering cold, sometimes cozy warmth; the icy Snow Queen outstandingly cast with Mojca Erdmann - sounds "clear and transparent like frozen crystals" (Neue Zrcher Zeitung). The musical story for soprano, two speakers (Delia Mayer and Max Simonischek) and orchestra is aimed equally at children, young people and adults. The recording of the world premiere with the Tonhalle-Orchester Zrich under the direction of the composer is released on this CD.

The 80-page booklet contains the German libretto as well as the English and French translations.