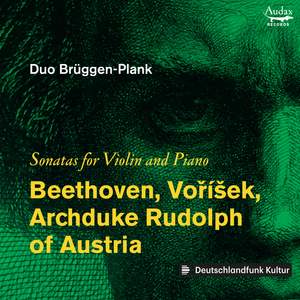 For its Audax debut, the Duo Bruggen-Plank explores Beethoven's last violin sonata in its historical context. Beethoven's serene work of ethereal beauty contrasts with a sonata by the 18-year-old Jan Hugo Vorisek in which Mozart's influence is unmistakable. Dedicatee of the two works was Austrian nobleman and patron of the arts Archduke Rudolph, whose own sonata complements this program. "They have a keen sense for great music off the beaten track, the violinist Marie Radauer-Plank and the pianist Henrike Bruggen, in short, the duo Bruggen-Plank." - (BR-Klassik, Oswald Beaujean) Formed originally as a one-off chamber music project during their studies, the collaboration between the two musicians developed over time into a permanent duo, which has now been in existence for 13 years. Their debut CD, which the duo dedicated to works by Karol Szymanowski, was very well received in the specialist press. "The recordings show passionate devotion and a direct sense of this highly artificial music." (Harald Eggenbrecht, Suddeutsche Zeitung) "This creates a partnership-based music-making process in the best sense of the word, in which two highly talented musicians put their skills at the service of a brilliant composer - just as it should be in a real duo." (The orchestra)