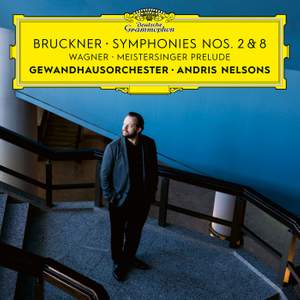 I like Nelsons’s approach [in No. 8], and the orchestra is magnificent...The Leipzigers have the right kind of sound, but Nelsons seems uncertain how smoothly the music should flow, so though... — BBC Music Magazine, April 2021, 3 out of 5 stars (Performance) / 4 out of 5 stars (Recording) More…

Andris Nelsons and the Gewandhausorchester Leipzig continue their award-winning Bruckner cycle. This time the Symphonies are coupled with Wagner’s Meistersinger Prelude. The Orchestra and the Latvian Maestro recently announced the extension of their acclaimed partnership until 2027. In 2019 The Times (UK) raved about Andris Nelsons and the Gewandhausorchester’s visit to the BBC Proms, “He [Bruckner] really does have to be played very, very well if the spaces that suddenly open up around the notes are not to seem a slackening of tension. It was one of the outstanding features of Nelsons’s reading – among the best Bruckner interpretations I’ve heard – that they never did. Every standstill was pregnant with consequence; and, while one could relish the beauty of sound [...] one felt the pacing hidden in the background. Detail was luxurious, but architecture paramount, and Nelsons’s unshowy approach profoundly impressive. One could almost believe one had come across that impossible thing: the ego-less conductor. No exhibitionism here. He revealed Bruckner, with a relentless vision that takes us into the strangest places, as greater than ever.”

I like Nelsons’s approach [in No. 8], and the orchestra is magnificent...The Leipzigers have the right kind of sound, but Nelsons seems uncertain how smoothly the music should flow, so though I found his account of it decent, it lacks the anxiety which surely pervades all Bruckner’s works.

In this new account of Bruckner’s Eighth Symphony, Andris Nelsons and his Leipzig players provide a masterclass in the creation of a sound world that perfectly serves their larger purpose. It’s a palette, what’s more, that’s been created from within the ensemble, not imposed from without…This, then, is a performance whose orchestral playing alone would guarantee it a place in the pantheon.

His mission is seemingly to eschew a more strident approach where everything becomes just a boisterous, blaring festival of brass, concentrating instead on ensuring that interesting details and counter-melodies don't get lost in the mix...Focussing on the lyrical aspect of Bruckner's music works extremely successfully in the slow movement of the Eighth: the tranquil radiance of the Leipzig strings in the opening bars is quite mesmerising.