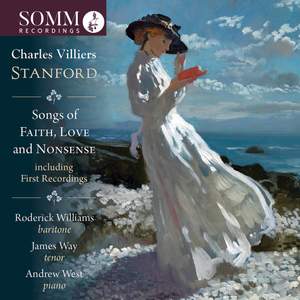 [The Three Songs of Robert Bridges] include some of the simpler and more appealing settings, with Roderick Williams’s lucid tone, straightforward manner and ability to match words and notes helping... — BBC Music Magazine, March 2021, 4 out of 5 stars More…

No. 2, God and the Universe

No. 1, Since Thou, O Fondest and Truest

No. 2, I Praise the Tender Flower

My Heart Is Thrall

Ochone, When I Used to Be Young

I Love My Ould Ireland

Stanford: The Triumph of Love, Op. 82

No. 1, O One Deep Sacred Outlet of My Soul

No. 3, When in the Solemn Stillness of the Night

No. 4, I Think That We Were Children

SOMM RECORDINGS announces a major new recording of songs by Charles Villiers Stanford including the first complete recording of Songs of Faith and first recordings of other distinctively vital songs.

his responses to matters of emotional ardour, spiritual fervency and the sublime nonsense poems of Edward Lear.

Setting poems by Tennyson and Walt Whitman, Songs of Faith demonstrates Stanford’s ability to give unique expression to the profound and the arcane with music of dramatic force and harmonic ingenuity.

The delightful Nonsense Rhymes taken from Edward Lear’s inimitably playful, poignant and pointed limericks show a different side to Stanford, a “highly articulate, dry humour like many literary Irishmen of his era”, as Jeremy Dibble says in his authoritative booklet notes.

SOMM’s previous Stanford recordings include the recently released String Quintets (SOMMCD 0623) and the complete, three-volume String Quartets (SOMMCD 0160, 0185, 0607) with the Dante Quartet praised by Gramophone for their “ardent, alert and thoroughly lived-in performances”, and Partsongs with the Birmingham Conservatoire Chamber Choir and Paul Spicer (SOMMCD 0128) which Limelight described as “excellent…beautifully sung”.

SOMM’s world premiere recording of The Travelling Companion (SOMMCD274-2) was hailed “a landmark” by Gramophone.

[The Three Songs of Robert Bridges] include some of the simpler and more appealing settings, with Roderick Williams’s lucid tone, straightforward manner and ability to match words and notes helping him realise effortlessly sincere and sympathetic performances...Despite the mixed quality of individual songs, tenor James Way gives The Triumph of Love eloquence and sweep...Fine playing throughout from pianist Andrew West, and impressive sound.

The Songs of Faith is the first complete recording of this cycle. Williams brings his wealth of experience here; he is in his mid-50s, and is highly effective. Williams’s wonderful diction helps convey his subtle and varied singing...the singing is marvelous from both soloists, and Andrew West on the piano matches the differing moods to perfection as well as catching the humor.

A hugely enjoyable anthology, and prospective purchasers can rest assured that production values and presentation leave nothing to be desired.