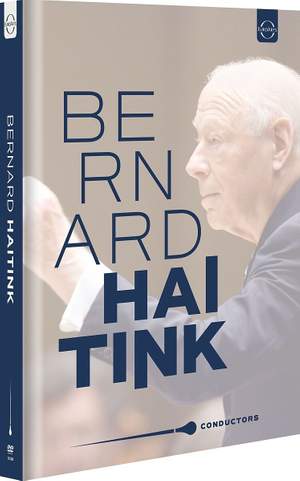 “It is a very special art of conducting. One must try to embrace the musicians.”

On September 6, 2019 Bernard Haitink bowed to his audience for the last time: After 65 years at the rostrum he ended his great career. This DVD edition is dedicated to the exceptional conductor Bernard Haitink and includes some of his most outstanding concerts with the Berliner Philharmoniker.

• During his 65-year career, Maestro Haitink has conducted the Concertgebouw Orchestra Berliner Philharmoniker, London Philharmonic Orchestra, Glyndebourne Opera, Staatskapelle Dresden and the Chicago Symphony Orchestra and many others.

• Bernard Haitink has been repeatedly bestowed with honours for his extraordinary musical accomplishments. Among other things, he is a Knight Commander of the Order of the British Empire and a member of the British Order of the Companions of Honour. He also has been awarded the Gold Medal of the International Gustav Mahler Society Vienna.

• Bernard Haitink's musical work is focused on Bruckner and a composer who had a decisive influence on the transition from late romanticism to modernism: Gustav Mahler. It is not least for this reason that Gustav Mahler's symphonies are the focus of this fascinating collection of live concert recordings.

• Including the intimate documentary: Bernard Haitink: It comes my way – Portrait of a conductor. In conversations recorded in the familiar surroundings of his home in southern France, his modesty becomes as clear as his conviction that the masterpieces of musical history must be considered and mastered anew with every performance.